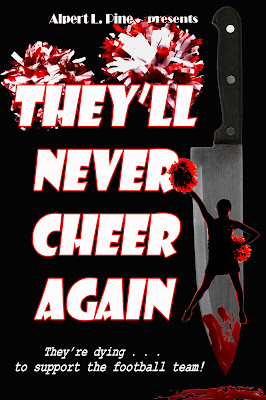 An homage to slasher films of the 1970s and 1980s, They'll Never Cheer Again is my first full-length novel.

Out now!!  Available as a paperback and in electronic editions.

From the back cover:


TEN YEARS AGO
A brutal hazing incident leaves a freshman cheerleader hospitalized in a coma.
In response, Casper Falls High School disbands both the football and cheerleading teams.


PRESENT DAY
The school board has voted to bring back the football team and its cheerleaders.

Ann Howard's twin sister, Lauren, is one of those new cheerleaders.
While Ann deals with the challenges of being an openly transgender teen in
a closed-minded small town, her sister's place on the squad and some of Lauren's
new friends threaten the previously rock-solid relationship between the siblings.

Meanwhile, a murderous force has awoken,
intent on vengeance and driven by a single powerful mantra:
They Will Never Cheer Again.


The paperback is available through Amazon (with Prime shipping) or Barnes & Noble.

Or get the Kindle Version from Amazon.