We Found Your Name in the Star Registry — Do You Have a Moment? 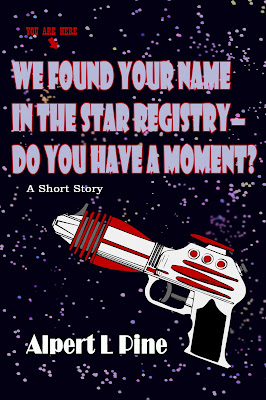 "I'm sorry. What exactly is this pertaining to?"

The strange fellow on my porch blinked at me from behind massive glasses, which rested on his round nose. He looked down at the book in his hand, then back up at me.

"I'm nice to meet you." He was wearing an over-sized raincoat and a big rubber hat, although it was clear and sunny.

"Selling?" Those big eyes blinked at me. He lowered his head to study the book, flipped a few pages.

"Yes," I said, "selling. You look like a solicitor." I pointed to the sign posted on the side of my house, just beside the front door. "I clearly have a sign here—"

"Your name is—" He stated my name and my address in perfectly clear language. He then proceeded to recite my phone number, bank account number, previous addresses, my first pet's name, my mother's maiden name, the name of the street I grew up on, my childhood best friend's name, the color of my first car, the first concert I attended, and the name of the city I was born in. Flawlessly. Accurately.

He looked at me, blinking.

"Me buy star?" What the hell did that mean? Buy star? I opened my mouth, then closed it. Wait a minute, I thought. I had bought a star, a year ago—one of those gimmick things through the International Star Registry. Anyway, I assumed it was a gimmick. A neat one, though. To own a star—kinda cool.

He pulled something from his pocket, a folded-up paper which he began unfolding. "You buy this star." He held up what turned out to be a map, partially opened, and indicated with his finger a dot amongst a multitude of dots.

"You mean that's my star?" I asked, slightly distracted by some weirdness concerning his finger that I couldn't quite articulate. It didn't seem . . . human.

"Your star," the strange fellow agreed. "Here." He indicated a different dot several inches away from the first. "Us here now. You, me, ship."

"Oh!" I chuckled at the misunderstanding. "You must mean 'car'. Ship. Car. You're out of fuel. And you need a gas can." I laughed, delighted to have broken through the confusion. "I'll get you one."

"No car." He thumbed through his small phrase book again, letting the map hang down to the ground. He cleared his throat. "I have spaceship in orbit."

"Need fuel for go home. You star most close."

"From star, yes. Star fuel." He lifted the map up. "You star most close. We can get fuel?"

"Are you saying the International Star Registry is legit?"

"And you need . . . what? To harvest that star for fuel? Are you asking my permission?"

"Yes. Need fuel for go home. You most close star."

"You're asking my permission."

He dropped the map to the concrete porch and reached underneath his over-sized raincoat. When he brought his hand back into sight, he was holding an oddly-designed gun! Some sort of laser or death ray, no doubt.

"No need," I said, laughing nervously. "It's yours, understand? Take all the fuel you want—I don't need it."

He extended his arm towards me, bringing the bizarre gun closer. I might have whimpered a little.

"For you," he said, holding the gun out. "We no money from this place. Earth. So, instead." He hefted the weapon. "We pay for star fuel for go home."

"Are you serious?" I slowly lowered my hands. I carefully reached out and took the offered weapon. I turned the strange gun over in my hands, digging the radical, alien design. "Far out."

"For fuel." The strange fellow made an awkward bow. "Thank you."

"You're welcome," I said, awed by the alien tech in my hands. I was barely aware of him turning and bouncing down my front steps and walking onto my lawn. I looked up at the flash of light—he was gone.

Dumbstruck, I slowly shut my door, admiring the alien gun I held.

I needed to try this thing out. Hot damn! I wanted to blast something with my alien gun. But what? Where?

I decided the backyard was the safest place. I hurried through the house, out the sliding back door, and onto the grass. I looked around, scanning for a suitable target.

There. That old tree stump I'd been wanting to get rid of.

I walked up to it, pointed the gun at it. Was it safe, I wondered, to fire this thing? Should I have safety goggles on? Stand farther away?

My excitement got the best of me.

I closed my eyes and pulled the trigger.

Cautiously, I opened one eye, then the other.

The tree stump was still there. There was a little flag of some sort hanging out the barrel of my laser death ray gun. I leaned forward to see.

The flag was red, with black capital letters that spelled the word, "ZAP".

What? I pointed the gun at the stump and squeezed the trigger. Nothing happened. Again. And again. Nothing.

That no good bastard! I craned my neck up, looking into the blue sky above. There was no sign of the sneaky alien bastard. Damn!

He ripped me off!

I threw down the useless fake gun and stormed into the house. Worst of all, I thought, the star I owned, which I thought to be just a gimmick, was actually real, but some damn alien had just tricked me into letting him use it for fuel.

Well, never again, I thought. I'd buy another star. And this time, no weird alien speaking broken English on my doorstep was going to get their greedy, con-artist alien hands on it.

I'd use a fake name.

Originally posted here at r/WritingPrompts, as a response to the prompt:

[WP] One year after purchasing a star with the International Star Registry, you are visited by inter-galactic aliens who come to you asking if they can harvest the stars energy for their spaceship.