Another Day, Another Curse(d Item) 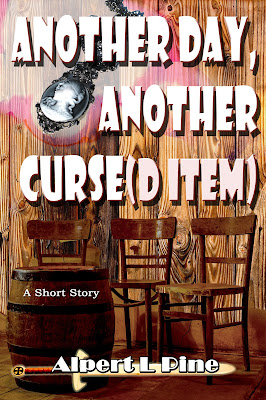 The tavern door banged open and a familiar figure appeared in the doorway. With him came a burst of cold, wet wind from without.

"Close the door, you lout!" called the barman, looking critically at the newcomer.

Shaking out his wet clothes, the newly arrived man bowed his head in apology towards the scowling barman. After a moment, the man raised his eyes and scanned the crowd. He found Andre watching from one of the common room's darkened corners.

Still shaking out his sodden attire, he approached the mage seated in the shadowy corner.

"Andre," said the man, plopping down onto one of the wooden seats, "thanks for seeing me."

"Magnus, my friend. It's no trouble. You said you have something to show me?"

Andre studied his warrior companion, Magnus. The big man, presently dripping onto the chair and the tavern floor, seemed exhausted. The wide shoulders and strong arms rested wearily upon the surface of the table. The warrior's red hair and beard were long and tangled and unkempt. The man was bedraggled.

"You look terrible, I dare say," said the mage. Leaning close, he peered at an odd piece of jewelry around the big man's neck. Some sort of amulet. "What's this?" The mage reached out for it.

Magnus backed away from Andre's hand. "Careful, there. It's cursed."

"Cursed?" asked the mage, even more curious. He spoke a few words of magic and waved his hand towards the strange necklace. It began to glow a soft pink, like the morning sky before a storm, and magical runes appeared in the air, circling the necklace. These identified the specific nature of the item.

"Light, Magnus! This is a Necklace of Temporal Doom. It slows you down to half your normal speed. Your attacks, your parries. Your running speed. This thing could get you killed!"

"Tell me about," sighed the big man. "It nearly did, more than once."

"Did? I don't understand. You've still got it on. We need to get this thing off of you."

"Aye," said the big man. "It's okay for now." He stretched out his right leg, thumping his boot on the dusty floor of the tavern. "See?"

Andre glanced down at the man's foot. The thick leather boots were of average workmanship. "What am I looking at?"

Instead of answering, Magnus simply waved his foot back and forth.

The mage leaned closer and repeated the spell from a moment earlier. Again, the pink glow appeared, indicating enchantment. Runes shimmered in the air, swirling around the leather boot, identifying the particular spell used on the boots.

"But—" Andre raised his head to find Magnus grinning wide. "These are Boots of Impatience. With these—"

"That's right," said the warrior, chuckling. "They speed me up the same as the necklace slows me down. Evens me out. Took me a damned long time to find a pair, too. Twice as long," he laughed, "with the damned necklace."

"Why didn't you just get rid of the necklace?"

"I could've done that," said the big warrior. "Could've done that. But it would've cost me an awful lot to have the curse removed. This way"—he pointed down to the leather boot—"more loot."

"But . . . I don't understand. Is this why you've come to me? To remove the necklace and the boots?"

A young woman approached the table. "Get you fellas anything to drink?" Her hair was as red as the warrior's. Long and braided, it fell over her left shoulder, which like her right shoulder, was bare. Her simple white blouse did more than hint at ample bosom beneath.

"I'll have more hot water for my tea," said Andre.

The warrior, whom Andre noticed was staring at the woman's chest, said, "Ale. A large mug, please."

The waitress spun away to fetch their drinks.

"Well, then," said Andre leaning forward. "If you're not here to have me remove the necklace or the boots, why did you ask me to meet you?"

"Because of this." Magnus reached under the table, and presently brought forth a sheathed dagger. He placed it on the table between the mage and himself.

Andre leaned forward, studying the weapon. The sheath was nondescript leather, but the dagger appeared almost ornamental. The hilt was encrusted with jewels and gems and delicate metalworking. "The design is splendid." He glanced at Magnus. "May I touch?"

"Better not," said the warrior. "That's the thing. It's cursed."

"Cursed?" Andre peered at the dagger. "Cursed how?"

"That's why I came to you. I need to know what the dagger's doing to me, in order to figure out what to do about it."

"Well, if it's cursed, Magnus, then the prudent thing to do would be to get rid of it."

"Do I look prudent to you?"

Andre blinked at his companion and said, "Ah, I suppose not."

The waitress returned just then, setting a mug of ale before Magnus, and a steaming cup of hot water in front of Andre.

"Many thanks, m'lady," said the warrior. Magnus watched the waitress walk from their table to another on the opposite side of the room. He sighed loudly. Andre waited until he turned back.

"So you wish for me to identify this cursed dagger, so that you might what? Find another item to counter the effect?"

"Sounds about right," agreed the warrior.

"Alright, then." The mage leaned closer to the dagger and repeated, yet again, the spell of identification. The dagger began to glow with a soft pink light. The magical runes appeared in the air, dancing and spinning around the sheathed blade.

"What is it?" asked Magnus.

"This is a particularly devilish item, I'm afraid."

"Tell me," said the warrior, gulping down some of his ale.

The mage considered the warrior. "Have you heard any . . ."

The mage cleared his throat. "Maybe a voice inside your head?"

"A voice?" The big warrior shook his head. "What sort of voice?"

"Maybe a whispery kind. Telling you, I don't know, maybe to kill?"

"To kill?" The warrior rubbed his red-bearded chin and looked at the ceiling. "You know, now that you mention it." He reached for the blade.

The mage snatched his wrist in the air. "Easy," he told the warrior. "Relax."

Magnus shook his head as if to clear it and relaxed his arm. Andre released the warrior's wrist and the big man gave a nervous sort of chuckle as he pulled away. "Maybe there is a voice," he said carefully.

"This blade is a cursed Dagger of Innocent Blood. It latches on to the owner's mind, begins to plant suggestions within. To kill. To take innocent life. To murder. This," said the mage, indicating the dagger on the table between them, "is not a thing you want to hold on to, my friend."

"Aww, hell," said the big man wistfully. "Look at it. It's gorgeous. Ain't there another item or weapon out there—something which will counter the effects of this dagger? You know, make me not kill innocents and stuff?"

"Please, Magnus. You need to see a priest-mage and have this curse removed. It's latched onto you now. Even taking the dagger away won't heal you. You'd be driven mad with the need to reacquire the dagger and to kill. You might even use your bare hands in the meantime."

"So you're saying I should keep the dagger."

The mage put his palm to his forehead, exasperated. "Yes. But only because it's safer. What I encourage you to do—no, I implore you—is to have the curse removed."

"There ain't any other items out there I can go get to counteract this dagger's effect?"

The mage sighed. "You're set on this course of action, are you?"

"Alright." Andre sipped at his tea. "Allow me to think on this."

"Take your time." Magnus reached out and drained the rest of his ale. The warrior turned in his seat and began looking for the waitress. Andre leaned back in his chair and began to run through all the magical items he had heard of that might work to balance out such an awful curse.

The mage sat in meditation; the warrior drank ale, and with his eyes focused on the curves of the waitress, meditated in his own way. Finishing his third mug of ale, the big man burped and wiped a meaty forearm across his lips. He turned in his seat, waved for the waitress to bring another ale, and when he looked back towards the mage, Andre was staring at him.

"I've thought of something."

"I can't guarantee it will work."

"Not an easy quest is my middle name."

"Alright then, listen up." The mage cleared his throat. He reached out for and sipped his now-cooled tea. "The Helm of Inattentiveness."

"The Helm of Inattentiveness. Now, mind you," said the mage, "there're going to be a few drawbacks."

"What's the Helm of Inattentiveness?"

"I'm getting to that," said Andre.

He paused. The young waitress appeared at their side. She replaced Magnus's empty mug with a fresh, full one, and then spun away back towards the bar. The warrior watched her go.

Andre cleared his throat. "As I was saying—the Helm of Inattentiveness."

"That's exactly it," said Andre, a smile coming to his lips. "When worn, the Helm of Inattentiveness prevents the wearer from being able to hear or understand anything spoken to him or her."

"So I wouldn't be able to understand anything that anyone said to me? Like, at all?"

"Well, I did say there would be drawbacks."

"But I could still talk normally?"

The mage nodded. "You would be able to talk just like normal. People could understand you—you just wouldn't be able to understand them. You wouldn't even know they were talking to you in many cases, unless you were looking right at them."

"And this helm . . . it would block the mental commands of the dagger?"

"Well, of course it's never been attempted that I know of," said Andre. "I can't guarantee anything, as I said—"

"That's good enough for me," said the warrior. "Where can I find the Helm?"

"The last known owner of the Helm was Winslov the Terrible, who ravaged much of the northern countryside a decade ago."

"Right. Well then, you probably know that his old fortress has never been fully explored. More than one brave soul has attempted it, but most return empty-handed. If they return at all."

"Very good," said Magnus, grinning. He reached out and scooped up the dagger, and reaffixed it to his belt. The mage watched with worry as a flicker of some dark emotion crossed the warrior's face. No doubt, the dagger was speaking to him.

The big man downed the last of his mug of ale.

"I'm off then," he said, standing. "I thank you, Andre, for your assistance."

"Magnus," said the mage, "I still believe you should see a priest-mage."

"Perhaps if I fail to retrieve the Helm." He patted the dagger attached to his belt and stared at it longingly. "But look at this beauty."

"I will," said the warrior, turning to go.

The mage cleared his throat loudly. "Magnus, a few coins for the ale you've drunk?"

"Sorry, friend," said the warrior cheerfully. "I've haven't got any." He held up his coinpouch, which was clearly empty.

The warrior shrugged. "I picked this up somewhere, or other. It's a Purse of Perpetual Emptiness."

With a wave of his hand, the warrior was on his way.

Shaking his head, the mage watched him go.


Originally posted here at r/WritingPrompts, as a response to the prompt:

[WP] An adventurer keeps picking up cursed items, but they always balance out