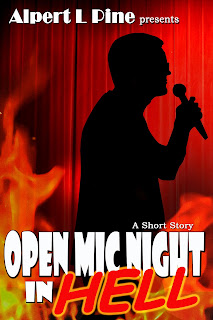 Smithers took the stage shaking terribly. When he reached out with one hand to hold the mic stand, you could tell it was an attempt to steady himself and hide the wobbliness of his knees.

I empathized. I'd been there before. We all had. Over and over and over.

Smithers licked his lips and looked at the notebook in his other hand. His joke list. All comics use them. Just a note or a title, a couple of words, a guide to keep yourself on track. Sometimes, the mind goes blank up there. It happens to the best. A notebook keeps you focused.

Here, the notebook goes blank. You can watch it happen. The first time a new guy's eyes go to the page and find nothing written there. The eyes grow wide and white, the tongue comes out and tries to moisten dry lips. The Adam's apple bobs. A nervous look up at the audience, whose laughter from the previous joke is just finishing up. A hush settles over the space. Expectant. Make us laugh again, funny man.

It was that silence, a sort of unspoken challenge from the spectators, that Smithers glanced up and saw. Waiting faces, expecting something funny. And there was Smithers, up on the stage, holding a notebook that had gone as blank as his mind.

He chuckled nervously into the microphone. Hoping for some sympathy laughs. No takers.

I looked around the room. All eyes were forward, focused on Smithers. All extraneous conversation — the type which never stops when you're up there going through your routine, killing it, or at least, not biting it — had disappeared. No one was distracted. Fully attentive in a way the audience never is until you're dying.

Smithers was dying up there.

Well, technically, he'd already died. We all had.

It was so quiet, you could hear Smithers swallow. He fiddled with his notebook, turning pages, thinking perhaps that he'd opened it to the wrong page. The microphone picked up and amplified the shuffling noise of the pages. Harsh, abrasive.

Some grumbling in the crowd then. A few audible mutterings, as some in the audience turned to their companions to remark on the fellow up on stage who was just then dying.

Smithers panicked. Another nervous laugh burst out of him, this one causing the inevitable, piercing feedback. Always the feedback to make an awkward situation more so.

Now the annoyance and displeasure of the crowd became a tangible thing. It was the sound of sympathy escaping as air squeals from a shrinking balloon.

"This sucks," one voice called, over the gradually growing rumble of discontent. "You suck."

Smithers tried to chuckle and laugh it off. "Th-that's what your mom sa—no, wait." He coughed into the mic, possibly another unsuccessful attempt at feigning laughter.

"Boo!" Another voice from the audience rose up.

"Loser!" called yet another. This—inexplicably to poor Smithers up there on stage—received a few chuckles from a crowd still looking to be entertained and grasping at whatever was available. To Smithers, this was a form of betrayal.

The adrenaline pumping through his system, which had thus far produced nothing except sweat, nervous laughter, and an obvious shaking in his legs, now became toxic. It takes a strong man to resist the aggressive urges. Smithers was not such a man. He chose to attack.

"Oh, screw you, people," he snapped. Feedback whistled. Momentarily, the crowd quieted. Not from being intimidated or chastised, nor from any expectation that things were about to become funny.

No, they wanted to watch Smithers implode.

And implode he did. Cursing, swearing, pacing, and ranting. He yanked the mic from the stand, carried it with him as he stalked back and forth, spewing out his vitriolic assessment of us, of the comedy club, of Hell. Not even Satan himself was safe from the anger boiling over in Smithers.

When he'd finally had his say, he tossed down the microphone in frustration onto the stage causing another burst of feedback. Smithers turned and walked off.

Boos and hissing and curse-filled threats followed him offstage, and the rowdy crowd spent several minutes growling and grumbling.

Eventually, the MC came on, clapping his hands together, a notecard with the night's lineup clutched between the fingers of one hand. The MC bent and picked up the mic, and tapped it gingerly with a finger. It thumped approvingly.

"Alright, that was Winston Smithers, everybody. How about letting him really hear you."

The crowd enthusiastically returned to a state of agitation, yelling and screaming obscenities at the comic whom had vacated the stage. The MC let them go on for a bit, before hushing them with his hands.

"Alright, our next comedian—"the MC looked at his notes, pausing briefly when he found they were blank. "Well, fuck it." The MC shrugged, and tossed away the card. "Please welcome back to the stage our next comedian"—the MC put out an arm towards the backstage area—"Winston Smithers. Give him a big hand, everybody."

I could almost see the look on Smithers' face backstage, upon hearing that he had to go out again. Those twisted features that came to all our faces, when we finally realized exactly where we were. We'd all been through it.

A moment later, the audience was treated to the sight of the nervous, sweating comedian making his way slowly on stage. He carried a notebook in one hand, and approached the mic stand, clearly shaking. With his free hand, he reached out to steady himself. He greeted us, looking slightly panicked, and then turned his attention to the notebook in his hand.

You could see the look on his face slowly fall.

A guy's first night at the open mic in Hell was always . . . well, hell. And it would never end.

This story was written in response to a writing prompt at r/WritingPrompts:

[WP] It's your first time doing stand-up and you've completely forgotten all of your jokes.
By Alpert L Pine at November 23, 2015