The Truth of the Matter 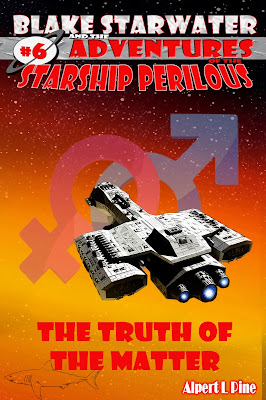 Blake Starwater and the Adventures of the Starship Perilous #6.

What it's about:
Blake Starwater is captain of the Starship Perilous. Traveling along with him are the frisky Felioness, Kitty, and the cynical robot, OMBot. Together with some new crew members, they soar between the numerous Known Worlds, taking on the jobs that other space crews won't do. The risky jobs. The dangerous jobs. The sometimes less-than-legal jobs.

The Perilous is on Tangerine receiving repairs after its latest adventure. While one of the newly-arrived crew members debates whether to stay on board or to leave the Perilous behind, the rest of the crew deals with a dispute between a local parts dealer and a merchant captain. Blake and Kitty just happen to have a history with the shady merchant captain, and Blake is all too eager to help out the parts dealer.

Can the crew bring the swindling space merchant to justice, or is there more to the story than they know? And will they leave Tangerine with one fewer crew member?

Blake Starwater and the Adventures of the Starship Perilous: Adventure #6.